We Never Knew Just What it Was...
the story of the Chad Mitchell Trio

For all their differences, Mike Kobluk and Chad Mitchell never disagreed on the quality of their music.  The rehearsal process of creative collaborationfinding songs and harmonies was sacred.

The Chad Mitchell Trio was better than anyone in the emerging 1960s folk scene.  But as Mike, Chad and Joe Frazier raced along a frantic treadmill of rehearsals, recording sessions, nightclubs and concerts, Mike and Chad began to realize the demand for musical perfection was the only thing they had in common.  Their personalities were and remain polar opposites.  When Chad left in 1965, neither mourned the parting.  John Denver replaced Chad.  Two years later, Joes demons caught up to him forcing Mike and John to fire Joe.

When folk reunions became popular, fans and folk historians agreed that The Trio was the one group that would never take the stage again.  Their schism was just too great.  Mike and Chad hadnt spoken in twenty years.  Then came a call.  I will if he will.  Their mentor and music director Milt Okun worried they were making a mistake.  They couldnt possibly be as good as their fans remembered.

They were.  Mike and Chad kept their day jobs, and their distance.  But once again, they shared the music.

The book, written by Mike Murphey, with Mike Kobluk and Chad Mitchell, is the first comprehensive telling of The Trio’s journey that began at Gonzaga University in 1958 and ended in 2014 with their Farewell Concert, sponsored by WFMA.  It's an intimate biography of the Trio, with extensive interviews with Mike and Chad, a forward by almost CMT member and Trio friend, Tom Paxton, and the behind the scenes story of their first reunion in 1986 based on interviews with the musician who made it happen, Doris Justis.

On September 9, 2021, a book release celebration was held at the First Interstate Center for the Arts in Spokane, Washington, for We Never Knew Just What It Was  the story of the Chad Mitchell Trio.  The two hundred Trio fans who attended in person experienced a magical evening of music and stories as Mike Kobluk, Chad Mitchell, author Mike Murphey and guests including George Grove of the Kingston Trio and Tom Paxton looked back on more than 60 years of remarkable memories.  Many other Trio fans tuned in via an internet presentation which was interrupted by technical difficulties.

A video has been prepared utilizing the clips and songs that were shared that night along with actual footage and photos of the speakers and guests.  This video is being made avialable to everyone, free of charge, on the author Mike Murphey's website.  There you will find the link to obtain the permission to view and even download the video.

The Ballad of Murder Incorporated 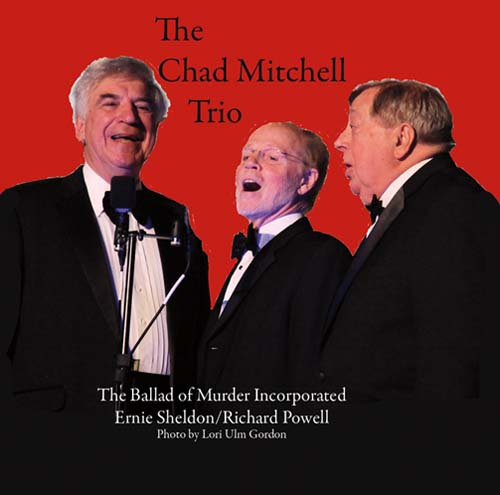 Early in 1963, The Chad Mitchell Trio was hired to perform on a comedy album recorded at RCA Victor studios in New York City.  Comedian Wally Cox wrote a script poking fun at the controversy raging at that time over what could be legitimately called a folk song and who could be considered pure and unsullied folk singers.  Along with the Belafonte Singers, the trio recorded several songs used on the album.  Only one of those songs was performed solely by The Trio.

At one point, Cox suggests that folk songs were not solely the province of hillbillies.  He suggested people with urban rootscitibilliescould also share in folk music traditions.  He offered The Ballad of Murder Incorporated as an example.

The Ballad of Murder Incorporated was written by Ernie Lieberman, who performed under the name Ernie Sheldon.  Ernie replaced Lou Gottlieb in The Gateway Singers in 1958.  He later joined The Limeliters as Glen Yarbrough in the Limeliters.  He was an accomplished lyricist whose most famous song was Yarbroughs biggest hit, Baby the Rain Must Fall.

Once Coxs album was recorded, it received a cold reception from RCA.  The project never got out of the studio and only three copies of the album were pressed.  Mike Kobluk received one of the copies under instructions to show it to Milt Okun and the other members of the trio.

I didnt think the whole thing worked at all, Mike said.  The album just wasnt funny.  So I didnt show it to anyone.  I just put it away.

In fact, Mike didnt dust off his copy of the album until fifty-five years later when he played it for author Mike Murphey and Chad Mitchell during one of their interview sessions for We Never Knew Just What It Was  The Story of the Chad Mitchell Trio.  That was the first time Chad ever heard the recording.

The album might not have been funny, but this song is, and it was performed superbly by Mike, Joe and Chad accompanied by Paul Prestopino on guitar.

The book and song are available for purchase on our online store now!  We are offering the book and CD in the following packages:

Click here to listen to Jeff Hyman interview Mike Murphey and Chad Mitchell on his Internet radio show, Somewhere in Time.  They discuss the new book, We Never Knew Just What it Was...the story of the Chad Mitchell Trio and play several Chad Mitchell Trio songs, including the CD single, The Ballad of Murder Incorporated.

Len Jaffe's review of We Never Knew Just What it Was... the story of the Chad Mitchell Trio

Author Mike Murphey, with the assistance of original group members Chad Mitchell and Mike Kobluk, have done yeoman's work in assembling the history of the Chad Mitchell Trio into an interesting and entertaining read you won't want to put down until you're done.

Originally formed in 1958 on the campus of Gonzaga University, Mitchell, Kobluk, and original member Mike Pugh presented generally traditional folk fare arranged for three voices.  Once having gained a foothold on the folk circuit, thanks to an association with singer Harry Belafonte, the group quickly became well-known for their satirical material, including songs like "Lizzie Borden" and "Super Skier", and over the course of just a couple of years, incorporated a politically Left-leaning stance with songs like "Barry's Boys" and "The John Birch Society", but also included some of the prettiest ballads of the day.  Pugh, at one point, left the group, and was replaced by Joe Frazier, and these three were the group combination most fans recall.  Chad left to go solo in the mid-60's, to be replaced by a yet-to-be-discovered John Denver.  Others followed, but by 1968, the entity was gone, until a surprise reunion happened eighteen years later that lasted until just a few years ago.

The stories that are related in the book, told by Mitchell and Kobluk, paint a picture of a much different America than what we are experiencing today.  Murphey manages to keep the flow of information chronological, and certain episodes along the way will make you laugh, cry, and definitely think about the world we had then, as well as what we live with now.  The forward by singer/songwriter Tom Paxton is sincere and heartfelt, and should be read before you start on the chapters.

If you're someone who missed the years the Chad Mitchell Trio were most popular, you may find the material here less than exciting, unless you really enjoy getting into the history of the CMT.  Clearly, Murphey's target audience with this book are those who were fans of the group during their peak, as well as when Chad, Mike, and Joe were replaced by other faces.  I'd readily recommend the book to anyone who enjoyed the group, but it would make more sense if you were there at the time.  Five stars!