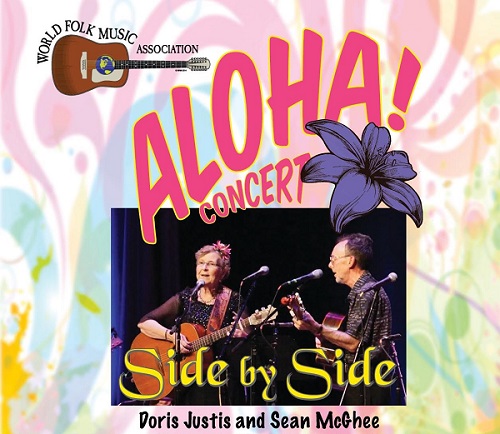 Brought together by the music of John Denver and radio host Dick Cerri, Doris and Sean have performed together for 31 years with a virtual "who's who" of folk music.  Singing and playing guitars, they are celebrated for their close harmonies and fun stage presence.  They have been the houseband for the "Music Americana/WFMA Showcases" since 1984.  This concert will be the culmination of their spring to fall "Aloha Tour" as Doris retires from her day job and moves to sunny and warm Hawaii!  Doris has been a mainstay of the local folk scene as a concert performer, producer, coffeehouse regular and host of her own radio show and production manager of Dick Cerri's Music Americana.  Sean is an outstanding tenor vocalist and guitarist, with a quick wit and irreverent sense of humor.  A master of the 12-string guitar, he has been featured as one of the "Three Folk Tenors."

This concert was an amazing evening of music and the audience in the Kreeger Theater thouroughly enjoyed the show.  However, some technical issues prevented us from broadcasting much of the show on Concert Window.  But we have learned from this first expericence with Concert Window and expect to be much more successful on our next broadcast.  We apologize to those not able to view the show online.